The Making of Intruder on Bride Street

This month I'm going to show some of the background and layout imagery throughout my films exterior environment. Populating an exterior scene in 3D can be one of the scariest parts of doing 3D when you start out, but luckily as with everything in CG imagery there are visual tricks & shortcuts. Before you start populating any scene you definitely need to have your Storyboard done, and be happy with all of the shots in your film. Shots are everything! They will help you place a camera in your 3D world, where its looking, what detail it can see. One of the rules I use in 3D is the furthest objects from the camera in any shot will not be 3D objects, instead I'll paint a very detailed 2D image of the object and place it on a simple plane, which may only have 4 or 8 polygons in it, instead of potentially 5,000 to 10,000 polygons depending on the level of detail needed. Think of it like a postcard you have placed at the back of your scene, pointed at the camera. This saves you loads of time as a 3D modeller, and keeps your scene running at a manageable speed. The more polygons you have in a Maya (or any 3D program) scene, the slower it will get. If your scene grinds to a halt as you're trying to work on it, it becomes INFURIATING! So avoid that for sure. 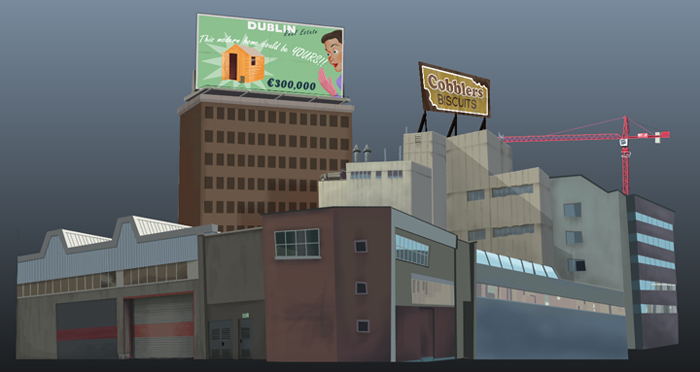 These are some of the buildings at the end of the street in the establishing shot and many other scenes. Each building is a CG painting with a transparent edge from Photoshop (or any other Image Painting program), of course painting something detailed like this is only possible using layering techniques and locking selected areas while you paint. So what you see here is the painted inages placed on 2D planes (like postcards) and pushed to the back of the scene where the street ends. 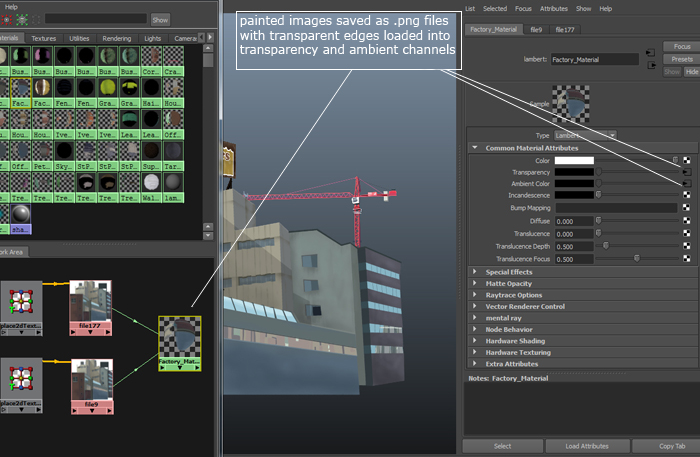 This is a screenshot of what is going on in Hypershade (The Material/Texture editor). I have saved a version of my paintings for the buildings as .png files. PNGS are pretty good for this kind of thing and they can be saved with transparent edges as a single layer image, unlike jpgs for instance. Also .png files are instantly recognised by Maya if they have transparent edges and it will display them on the 2D planes in the 3D viewport with transparent edges. I have also loaded the same image into the Ambient channel because of the way I am lighting and rendering my film, otherwise the buildings would look too dark in the background. 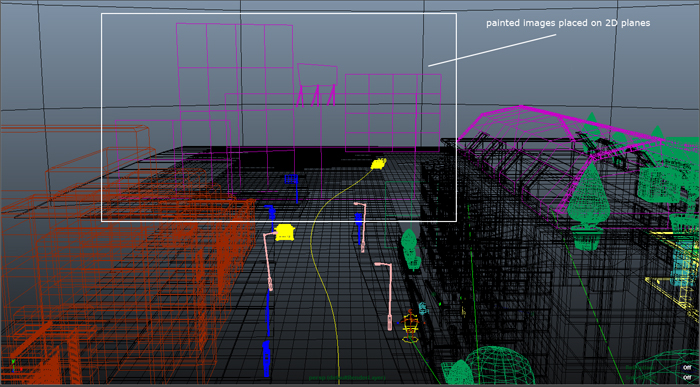 So here's what it actually looks like in wireframe mode. As you can see compared to the buildings modelled on either side of the street the polygon count is tiny. As you model more and more of your films environment you will begin to prioritise certain areas more important than others in relation to what the camera can see in detail. 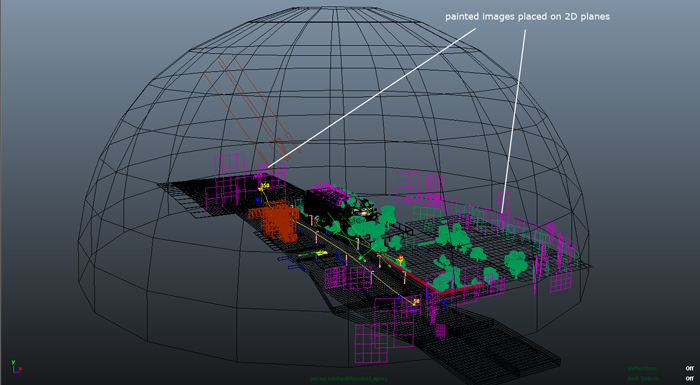 So here is the entire scene in wireframe mode. As you can see there are many 2D (pink coloured cards) planes with painted buildings on them and they are placed 360 degrees around the central 3D environment where all of the action happens. The giant dome wireframe is the painted sky which I might go into in a later posting. You will come to a point using any 3D software, when you have to start putting certain elements into layers and colour coding them to organise your scene, and be able to turn things on or off visibly as you animate. If you don't its your funeral! (As Homer Simpson says). 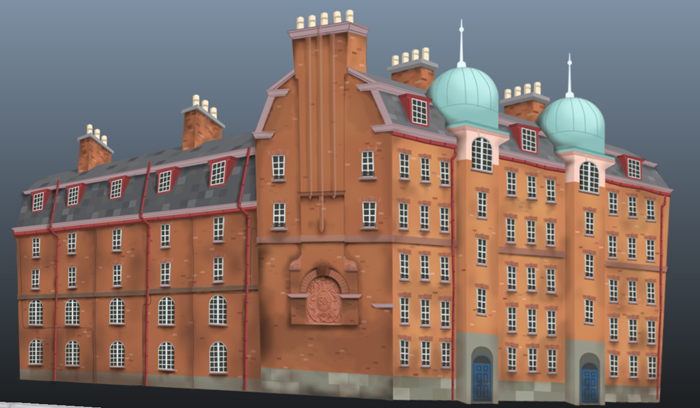 So lastly, here's one of the buildings facing the opposite direction from the first one I showed. Its on the other side of the park in the overall screenshot of the entire scene in wireframe. This took a few days to paint, again layering as you paint is so important. This is an historical building in Dublin so I wanted to make sure it was recogniseable but also part of the style of the rest of the buildings in my film.

Well thanks for stopping by, I'll have more 'making of' posts over the next couple of months but I'm fairly busy animating everything and blogging takes too much time sometimes ha ha :-)

Hello, my name is Fran Power. I am a 3D/2D computer animator/director working in Television & advertising mainly as a freelancer. I worked most recently as 3D animator/rigger/layouts on the Brain Freeze TV show for Kite Entertainment, broadcast on BBC & RTE. For a full view of my showreel and past work go to narfnarf.com
I'm currently directing a 3D Animated short film due for completion in 2017