The Making of Intruder on Bride Street

Welcome back everyone. This month I'm going to go through some of the props that I have scattered throughout the film. These are all 3D props that I have built over the last 2 years. So when making props for a short film you really want to be sure that you are only creating things that will definitely be in the shot. Otherwise its a bit of a waste of time.... well its a total waste of time! In 3D animation things take time to design, model, then texture paint and even when you get to the texture painting part you want to make sure that you have a very clear idea about how the final colour rendered look will....look. So good references are very important. References can be photos that you took, or found, sketches, doodles, designs from Films that may have influenced your style.

A lot of 3D artists will start off with sketches and a style that they feel represents their  Film, but after a while they will go straight into the modelling, or use the modelling process as a way of mentally sketching out different approaches (once you've been 3D modelling for 10+ years). It would be great if we could all afford the luxury of time to draw every single thing before its made, but only Big studios like Pixar, Disney, Dreamworks, Blue Sky...etc can afford to do that everytime.

Here's a shot of three different cars that appear in the early shots of the film. They are most definitely not the same car model with three different paints jobs on it and slight alterations...No,no,no! Ha ha, you learn how to be economical with your models in 3D, all filmmaking does this kind of thing, not just 3D CGI films. So the red car is in shot the most, therefore I painted that one first and colourzied/altered the other textures for two different colours. 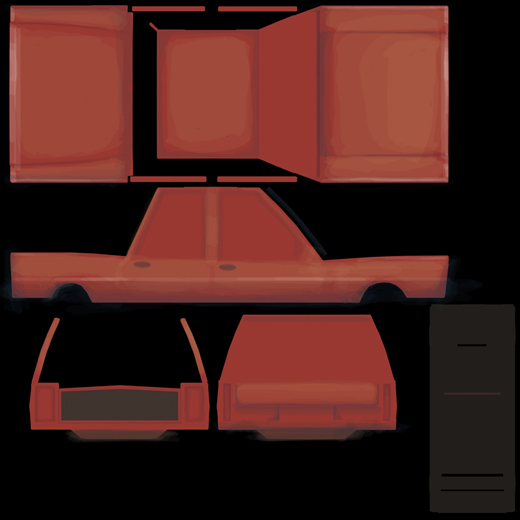 Here is a screen grab of the car model with its UVs unwrapped, a tiresome but very important process in any 3D software. I enjoyed painting textures making this film, but because of the rendered look that I'm going for, that means I have to hand paint every single object's texture in the film! Which is a little crazy for a one man team, but if you want to control how a film looks in a particular style its probably neccessary. I tend to pick a base layer colour, fill the UV areas flat. Then layer on top of that with paint strokes for shading, some dirt, some details, some lighter areas, some different colour strokes. I used the same brush type throughout the Texture painting process. 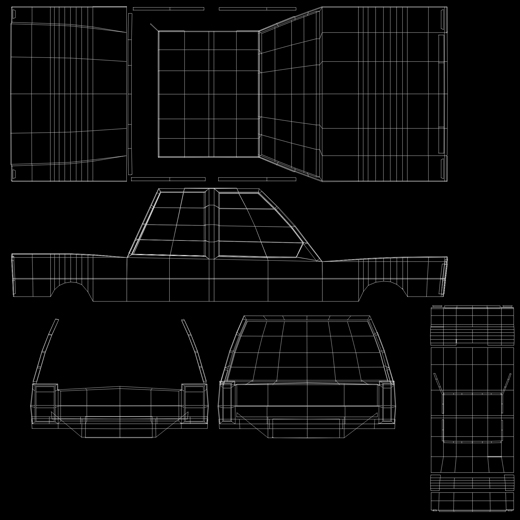 Here's the way the UVs image looked before I started painting. So you can see, its quite time consuming, but very satisfying when you put the Textures into materials in Hypershade in Maya. Then apply them to your model. 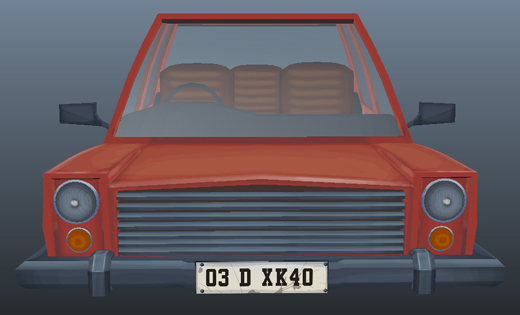 Here's a closer look at the front of the car.... 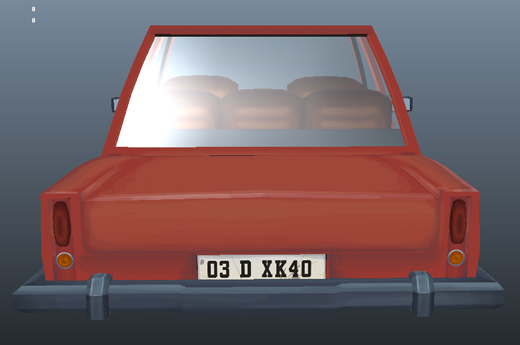 ....and the back of the car. Thats enough of that for now. 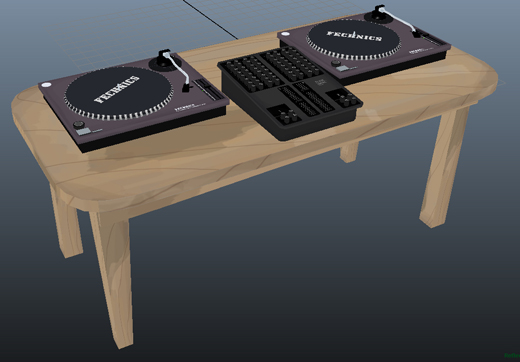 This is a prop from the apartment interior shots in the film. Its a DJs table with Decks and a controller in the middle. Again its the same process, the tricky thing is remembering your painting method for the Texture painting throughout the film, as you will be doing it on average over 2 or 3 years, and you may notice that your latest textures are better than the first ones, that are two years old, then you might lose your mind trying to redo things, reach for the whiskey...who knows? 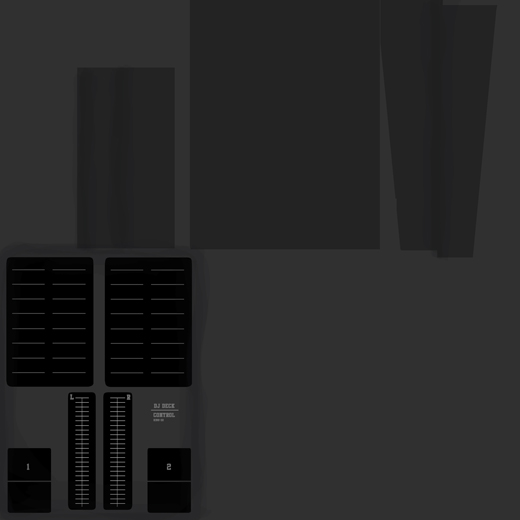 Here's the Texture for the Black Controller box. You may notice that I am pre shading in this film with the textures, in Hypershade the materials are Ambient, so really the shadows will be rendered from Maya in a different pass, same goes for contour shadows for everything, Highlight pass, Rimlight pass. I'll go more into the render process in a later post. When you want to blend a 2D and 3D look together in a Film this is a process that I found works for me. 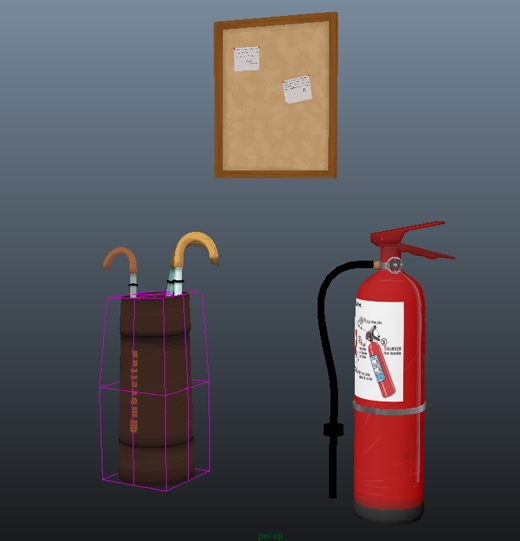 These props belong to the Lobby of the Apartment building. You can see how all of this Texture painting begins to take over, my God. 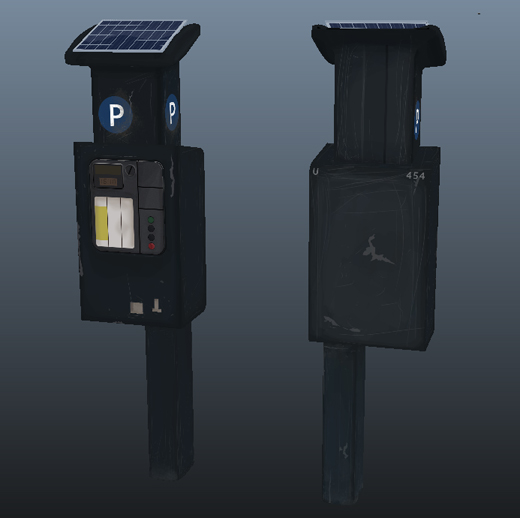 Here's a typical Dublin parking Meter pay station thingymajig. I think these are in the street scene shots, maybe the first 12 or so. There's a lot of detail there, jayzus, maybe too much ha ha. 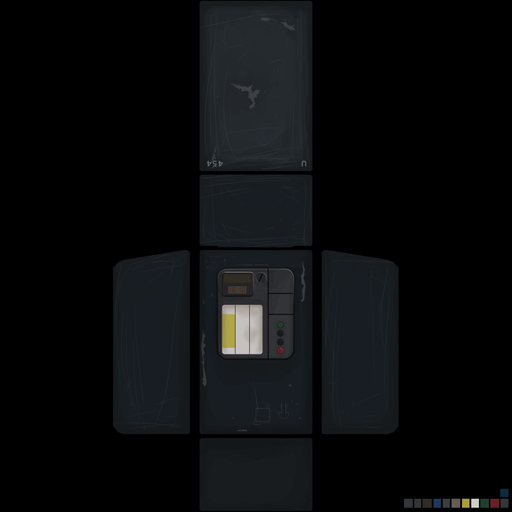 And the Texture painting in its unwrapped form. Okay thats enough for this month, I'm starting to feel a bit bombarded by textures myself. I'll have more crazy amounts of tedious detail ready for next month. Thanks for reading.


**Apologies for the text size variations. I've set it to normal in the Blogger Post edit, but it keeps making the text size large or small.
Posted by Unknown at 5:42 pm

Hello, my name is Fran Power. I am a 3D/2D computer animator/director working in Television & advertising mainly as a freelancer. I worked most recently as 3D animator/rigger/layouts on the Brain Freeze TV show for Kite Entertainment, broadcast on BBC & RTE. For a full view of my showreel and past work go to narfnarf.com
I'm currently directing a 3D Animated short film due for completion in 2017